Willing to help our present and future clients, below we have presented frequent problems and their solutions. Remember, however, that nothing will substitute original procedures recommended by original manufacturers; also, reasons for drive malfunction may be numerous, and they may reach beyond the scope of the drive itself.

Basic problems that may occur during every-day operation:

- reduction in drive power with time,

- final drive has stopped or runs itself.

Naturally, there may be many other complications with complete drives. We will, however, focus on the problems described below. Let's start with the most extreme situation, which is the final drive stopping suddenly.

If the drive system stops completely, there are two possibilities: the drive motor works, but the planetary gear itself has a fault, or both of the systems are inoperative. In the first situation it is very likely that the drive planetary gears are damaged. In this case, if the problem has been identified timely, it is possible to replace only the 1st planetary gear, along with the adjacent parts. Naturally, a situation may occur where the entire final drive will be damaged, resulting in teeth on all gears being broken. In the latter situation, where the entire drive does not rotate, you may check whether the brake system is working.

If, after leaving the machine on an elevated surface, the drive runs by itself, you should check the braking system - the problem is usually resolved by replacing disks. It may occur, however, that pressure in the hydraulic brake system will be insufficient.

There are also situations where the drive loses power as work progresses. The first reason that comes to mind in this case is the wearing of hydraulic motor. In this case, parts of the hydraulic motor must be replaced. However, there may be more reasons for that, including insufficient oil pressure, which should be inspected on the hoses connected to the hydraulic motor, or the track chain being pretensioned too much, with the general condition of undercarriage being poor, causing high friction, and making the drive have to overcome additional resistance. A simple, but often omitted procedure is checking the mode in which the drive is operated. Fast mode is always weaker on high inclination, which may result in apparent reduction of drive power. 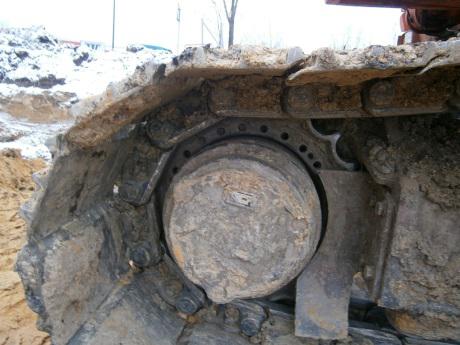 Vibrations, overheating or noise coming from the final drive are another problem that you may encounter when working with drive units. These may result from insufficient level of oil in the drive unit, or from severe wear of bearings, causing higher friction and overheating of the final drive. In both cases, the reason for such fault should be analysed. In case of vibrations, the first thing to do is to check screws on the sprocket, as well as screws fixing the drive - they may be loose. In other cases you may also check whether the hydraulic motor and planetary gears are in good general condition, and whether they are not worn. If the noise is coming from the final drive, stop the machine immediately and inspect the system for damages.

Excessive oil level is another possible fault. In this case it is likely that  hydraulic oil is penetrating to the planetary gears, resulting in the need to replace hydraulic motor seals. This fault may also result from simultaneous leak from the final drive: either from the front plug, or from main seals. In any case, the seals need to be replaced with new ones to prevent damage to the gears.